Bui Thi Kim Phuong, wife of Nguyen Bac Truyen, in a strong and moving video-statement sent from her home in Vietnam.

– The prize is a great honour and a wonderful encouragement while he is sacrificing his freedom and wellbeing for protecting the right of freedom of religion and belief for everyone, says Bui Thi Kim Phuong in a video-statement she has sent from Vietnam. She is banned from travelling abroad.

(See the video form the ceremony. The text continues below the video).

The Stefanus Prize was established by the Norwegian NGO Stefanus Alliance International. It is awarded every second Year to a person or persons who has made a great contribution to the human right of freedom of religion and belief.

This Years winner, Nguyen Bac Truyen, a Vietnamese lawyer and human rights defender, is currently imprisoned in a high-security quarter in An Diem prison, in solitary confinement. He is sentenced to 11 years behind bars. He is regarded as a threat against the Vietnamese state.

Ingvill Thorson Plesner expresses why Nguyen Bac Truyen is awarded the Stefanus prize. Together with the prize and the diploma, is also a painting of a prisoner, by the artist Reidar Kolbrek (to the right). Photo: Stefanus Alliance

«Great personal costs»
In a digital prize-ceremony, due to the pandemic, Ingvill Thorson Plesner from the prize committee, highlights three reasons for awarding Nguyen Bac Truyen:

– For his enduring and longstanding commitment to promote freedom of religion or belief and defend the rights of minorities facing discrimination and oppression in Vietnam.

– For his uncompromising dedication to work for a democratic society where human rights are respected and justice is accessed by every person, regardless of their social, cultural or religious identity.

– For enduring great personal costs, including the compromised safety of his family and loved ones, as well as risking his own life, health and freedom while standing up for the rights of other.

She continues: – At this very moment, courageous women and men across the world are standing up to defend their own and others’ right to have, choose and practice their religion or belief – often at great personal cost. The Stefanus Prize 2020 is awarded to one individual; however, we wish to take this opportunity to honour all those who are on the barricades, peacefully working toward a world where everyone fully enjoys the freedom of religion or belief. We extend to you every good wish for your, health, liberty and quest for justice, says Thorson Plesner. 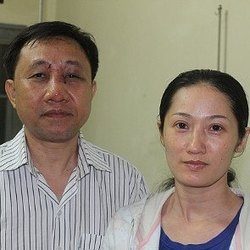 «Terrorizing acts»
In the Years before Nguyen Bac Truyen was abducted (July 2017) and sentenced (April 2018) he and his wife were assaulted and injured several times. Bui Thi Kim Phuong says that she is «extremely proud» of her husband. (The picture shows the couple after one of the violent attacks in 2014.)

– I have always stood by his side in the struggle to protect the right to freedom of religion or belief, even though myself and my sisters have to face cruel reprisals by the Vietnamese authorities. I am still traumatized by the terrorizing act when hundreds of police surrounded our home in Dong Thap province in February 2014, only 10 days before our wedding. Several shots were fired. The police shattered our front door and windows. They searched our house and smashed the worship altar. My husband was beaten merciless and taken away forcefully, she says.

– I urge Stefanus Alliance International and all the kind benefactors in the world to continue the support and advocacy for the freedom of religion or belief in Vietnam, says Bui Thi Kim Phuong.

A few days after she sent the video-statement, Ngyen Bac Truyen in the end of November began a hunger strike together with a group of fellow prisoners of conscience in An Diem prison. They are protesting unjust treatment by prison officials. They see there is no option for protest left than doing it with their health and life. She is worried about his husbands health.

Michelle Nguyen in a videostatement from Atlanta, Georgia, USA.

A successful engineer left his career
Michelle Nguyen, the coordinator of Vietnam Coalition Against Torture, based in Atlanta, USA, has known Nguyen Bac Truyen for seven Years and has cooperated closely with him.

– Tryen is one of the kindest persons I know, Michelle Nguyen says. Through much hardships, Truyen managed to graduate as an engineer and over the years started two successful companies. Truyen was the first policy pioneer in Vietnam who voluntarily introduced social compliance and gender equality standards in his two companies in 2004.

But then he decided to stop his career and instead study law to be able to stand up for people who were denied basic rights. As a lawyer Nguyen Bac Truyen has helped, among others, persecuted hoa hao-buddhists, political and religious prisoners and their families, disabled and severely discriminated veterans of the former South Vietnam and victims of land grab. He has also been in an earlier hunger strike for a catholic prisoner of conscience who were victim of torture while in custody.

«Brought me to tears»
In her video-message Michelle Nguyen continues: – Not long before Truyen got arrested, one day out of curiosity I asked him, «Why did you decide to give it all up and became a human rights advocate, sacrificing your business success and risking your freedom and even your life?»

– What Truyen told me next, brought tears to my eyes. Truyen said, it’s customary in today’s Vietnam to discuss business deals at fancy restaurants over expensive meals and alcoholic drinks. Truyen hated it, but that’s what he had to do to keep his companies running to support hundreds of his employees. But many times, during such setting Truyen looked outside the restaurant window and saw street children panhandling or digging in the trash looking for leftover food. He choked up and could not consume the exquisite meal he was treating his business partners to. Coming from a humble background, Truyen understands hardship. He really loves children, and he wishes that all children are afforded equal chance to grow up in a free, just and carefree society where they will be well taken care of and no one has to become street children or homeless, says Michelle Nguyen.

Demand his release!
​Michelle Nguyen asks for continued fight for Nguyen bac Truyens immediate release: – Unfortunately, his arrest in 2017 and subsequent 11 years prison sentence is a serious setback for the struggle for freedom of religion or belief in Vietnam. A remarkable human rights defender is now behind bars. But his courage and dedication still shine from the darkness of prison, says Michelle Nguyen.

«Hope You will be free»
Ed Brown, the general secretary of Stefanus Alliance International, said:
– In the midst of oppression, standing up for yourself may be noteworthy because it can be very difficult; standing up for ones own community is admirable; but standing up on behalf of others, when you yourself is being oppressed – that is truly courageous. That courage, that Nguyen Bac Truyen has shown us, inspires us. It inspires us to do great things, and it is kindling us a fire of hope

– So, we stand with you, Nguyen Bac Truyen. We are inspired and we are hopeful. We are hopeful that one day you will be free. And not only you, but other prisoners of conscience in Vietnam and around the world, members of religious communities who are marginalized and oppressed – that one day they will also be free. That they will be free to have a religion or belief, to practice it peacefully and to change it if they want.

«Praying for the persecuted»
The Norwegian singer Kristin Minde and musician Espel Tappel contributed to the ceremony with three songs, recalling the persecution led by king Herod following the birth of Jesus.

– We are singing in prayer for those who are persecuted to day, says Kristin Minde.